Protect In Our Communities

Home > Protect In Our Communities

Our local governments make plans and systematic investments to manage stormwater. It’s required. It’s important. And it requires persistent effort to maintain hundreds of miles of ditches and pipes, clean up thousands of tons of debris from street, and ensure all new construction minimizes runoff. Read here about some things our local county, cities, towns, and villages do to manage stormwater runoff for everyone! 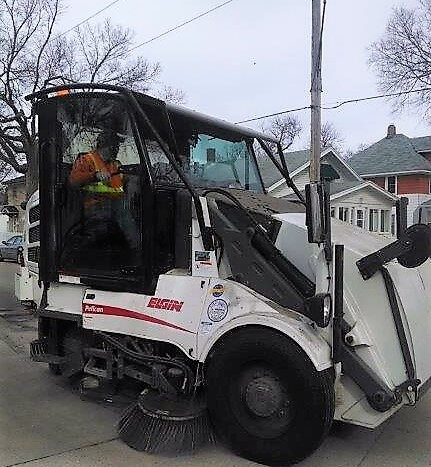 Street sweeping keeps MILLIONS OF POUNDS of sand, leaves and trash from flowing into our streams and rivers.

In 2017, the City of Onalaska swept up 639 tons of debris and 200 tons of leaves from city streets. That is ONE MILLION SIX HUNDRED AND SEVENTY EIGHT THOUSAND POUNDS of sand, leaves and trash that was kept out of local waters.

Shown in the photo, a Street Department employee with the City of La Crosse sweeps streets to remove debris. Each spring, both first and third shifts begin clearing winter sand and debris from the streets as soon as the weather permits. The entire city of La Crosse is swept approximately once every two weeks.

The Town of Holland designed and installed a rain garden on their property. This rain garden captures runoff flowing down McHugh Road towards HWY XX. 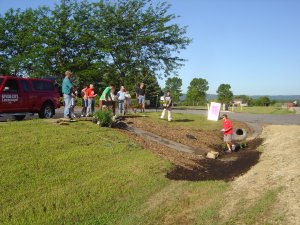 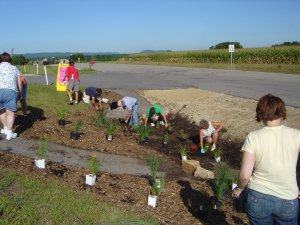 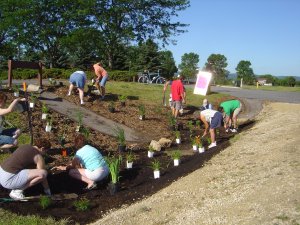 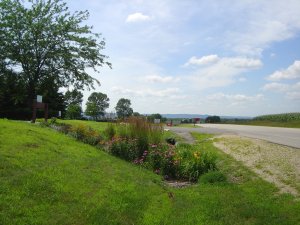 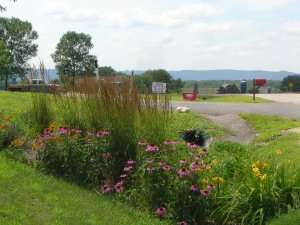 The Village of West Salem completed a huge stormwater project in 2017. After developer Jerry King constructed a 16-unit apartment building on a property adjacent to Neshonoc Road, he donated the remaining two acres to the Village of West Salem for stormwater management. The area now treats water not only from Mr. King’s development, but from the Lakeview Business Park. Because of this donation, West Salem was able to greatly reduce the area’s stormwater runoff. 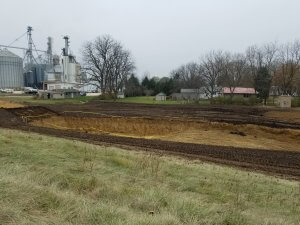 Clean Up Illicit Spills and Discharges

Illicit discharges happen too often in La Crosse County. People either assume the stormwater gets treated before it moves into our streams and rivers, or they just don’t care.

The following pictures are from an illicit discharge after Thanksgiving one year.  Oil was found at outfall on Mormon Coulee Road that discharges into Pammel Creek. After testing the water, the oil found was not a petroleum based oil (trains, cars), but more organic based (cooking). This spill was most likely caused by someone dumping used oil from a turkey fryer down a storm drain.  A careless, purposeful spill like this involved many costly man hours from the City of La Crosse Fire Department and Utilities Department, as well as the WI DNR. Sadly, there is no way to know who actually put this oil down the storm drain. If you ever see anything suspicious coming from the storm drains, report it immediately. The sooner the Stormwater Utility is made aware of these situations, the better chance they have of backtracking to the source.

The first two pictures are of an outfall off of Mormon Coulee Road at Pammel Creek, on the Southside of La Crosse.  The second two pictures show how the grease then moved along Pammel Creek toward Nottingham Street. 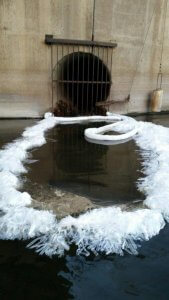 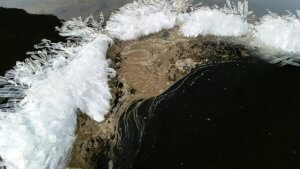 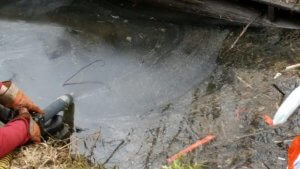 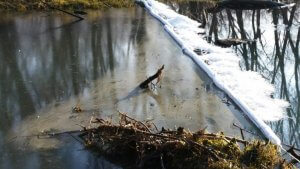 How is stormwater managed where I live?